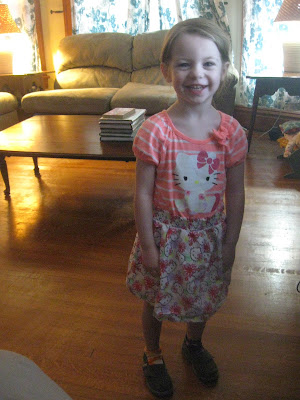 Lois attends preschool three days a week now for about 2 1/2 hours each day. At first she would come home at the end of every day and refuse to talk to me about it, beyond telling me in the most dejected voice you can imagine a three year old having "I did not have fun today, daddy."

"Did you run and jump and play like you wanted to, honey?"

"Did you learn anything?"

"What are your friends' names?"

It was pretty sad but she was always super excited to go to preschool when it was time so we kept going and I kept asking.

Finally, one day, I asked if she had fun and she was quiet for a second or two before replying in a carefully neutral tone, "Maybe." I knew I had her but I had to be careful. No simple questions. I thought for a moment and asked her if she had fun playing with one of her classmates, Eric. 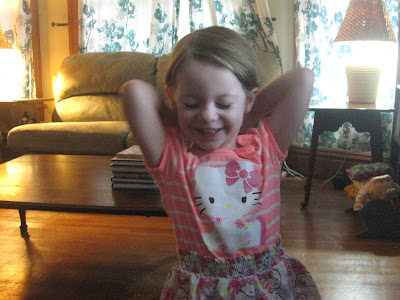 Since then she's told me every day that she's had fun and that she's played and what she's learned. I don't know why she was reticent at first and didn't want to tell me what was going on or that she was having a good time but finally, finally, she's willing to talk about it.

Yes, I can hear you longer-term parents saying "Just wait until she turns 11." I know. I know. But that's far away.

For now I'll take what I can get while I can get it.
Posted by Snippet at 1:05 PM No comments:

In Which I Bitch 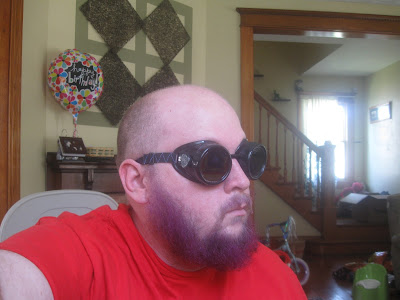 Even when you have the most adorable and amazing daughter in the world, parenting isn't always easy.

While I wrote that sentence, my daughter broke a plastic lamp shade by putting it on the floor upside down and standing inside of it after I had told her not to do that, then insisted "It was an accident, dad!"

She's smart, adorable, and a genuinely good child. I will never deny that she is probably one of the easiest children to raise ever born upon this world.

But that doesn't mean she can't be frustrating, that I don't sometimes get frustrated.

According to an article in the Washington Post recently, parenthood is one of the worst things that can happen to you as far as  your overall happiness goes, over the short term anyway. Sleepless nights, frustration with this small human who can't explain what they want and won't listen to your very logical reasoning why they can't do the things they want, like drawing on the wall or opening up the oven to "watch things cook."

So I'm going to bed your pardon while I talk about the things that are bothering me right now.

Today she asked to wear underwear. She would use the potty, she said, if she could wear big girl underwear for the first time. So we did it. She put on her underwear and danced around like a silly little widget. We had her little potty right here in the middle of the room, ready to go. I asked her every 15 minutes if she had to go and she insisted she did not.

About 2 hours later I realized the mistake I made as we cleaned up the entire kitchen floor together. And the hallway. (I want to stress that I did not get angry. I did not shame her. But she DID help clean up her mess.)

"Honey, you peed all over the floor instead of using the potty."

Yes, but if you could actually try, that would be great, thank you. Please?

Lois has learned to open the refrigerator door. I never knew that my 3 year old daughter would have so much in common with teenage stoners. She opens the door and stares for minutes at what's inside. She pokes at things to move them aside so she can see behind them and she stares some more. After a few unproductive minutes, she walks away, door wide open. If I'm there I close it immediately, of course (or have her do it) but sometimes I don't realize that she's done this and I end up closing it who-knows-how-much-later.

I'm close to putting up gates on the kitchen doorways but I'm tired of the gates. So tired of them.

Earlier I finally decided that I would start work on a project that's been on my mind for a while. I want to relearn how to draw, a skill I've lost since the surgery, and I had a very specific project I wanted to do to go along with this. I spent some time sketching things out and then started drawing it out. I was about 1/3 of the way through with this step when the grocery delivery guy showed up.

Lois helped me get the groceries in and helped me put them away. She played on the porch for a bit and was generally very helpful overall.

I have no idea when she got to the art and did her own drawing but I have to restart the project. I genuinely don't know when she could have done it but she did. I knew better than to leave it within her grasp and to let her out of my view: She loves drawing. I give her her own paper and her own art supplies but "helping daddy draw" is one of her favorite things to do when it comes to drawing.

I'll be starting over. It's not a lot of time lost and it's not like my drawing is a "work of art." It's not a big deal but it's frustrating.

And it's only noon.

I love being her dad. I love her. I love having her as a daughter.

But sometimes even the most amazing child can be a stinker.
Posted by Snippet at 10:22 AM No comments:

How Can It Be Preschool Time Already? 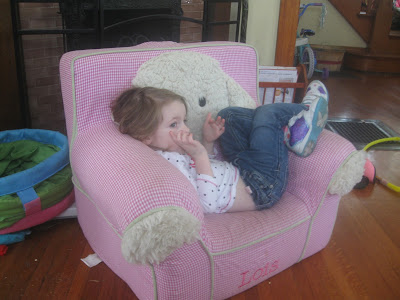 Chilling after a long two hours of preschool, Lois tells me that she had a lot of fun and can't wait to go back!

The teachers at the school already know us by sight and I'm not sure if that's a good thing or a bad thing. Much like how people I've met once often remember me far longer into the future than I'd expect, I wonder if it's a blessing or a curse.

Or maybe it's my purple beard.

While Lois was learning and having fun I worked around the house a tiny bit (picking things from the garden and taking out the trash, mostly) but I may have spent more of my time staring at the clock, worrying that I'd get a call any second that something horrible happened. I knew, rationally, that everything would be fine but emotionally? Emotionally I was a wreck.

I didn't think we'd have any problems at the drop off this morning and I was right. She walked into the classroom without even looking back. No tears but also no hug goodbye or even a wave. "Have fun, Lois" I called. I may as well have been talking to the wall; she was already enthralled with whatever was going on inside.

The report from the teacher says that there will be many photos of Lois. The teacher likes taking pictures and apparently Lois was everywhere in the classroom, whether she was supposed to be there or not, so she's in a lot of pictures.

We might have a problem with "listening to instructions" but since Lois is three years old I'm not too worried about it. It makes for good photos, at least!
Posted by Snippet at 11:06 AM No comments:

How honest are you with your children? 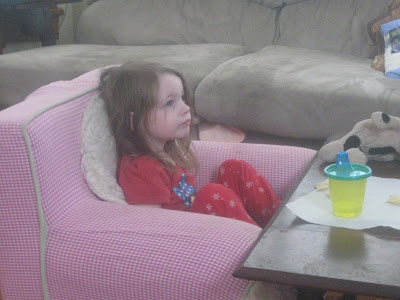 We were watching Disney's Frozen together this morning as we put off getting ready for the rest of the day.

If you haven't seen Frozen (living under a rock?) then be aware there's a spoiler below. An early-on spoiler but still a spoiler.

We were watching the movie together and when the King and Queen's ship sinks below the rough seas Lois said "Oh no, the ship is gone under the water!"

And she hit me with "But it can come back, right?"

There was a palpable pause. 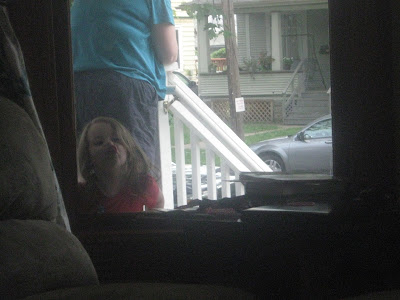 There was a longer, more thoughtful pause. She looked at me and while she wasn't crying or anything, her eyes were thoughtfully sad.

She quietly went back to watching the movie. I waited to see if she had any other questions but none were forthcoming.

We watched the movie in silence (except for laughter at Olaf's antics, of course) and had a good time. No questions, no worries, no explaining mortality to a 3 year old.

But was I too honest?

Would you have said "Oh, sure, honey! It can come back!" or would you have left it alone? Ignored the question?

How honest are you with your kids?
Posted by Snippet at 6:29 AM No comments: 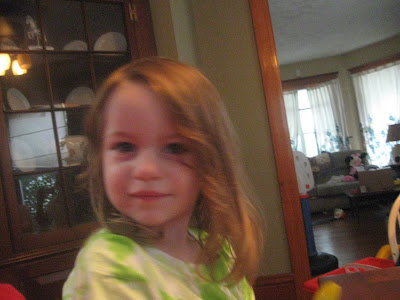 Happy birthday, my little daughter. You are amazing and I can't believe you're a part of my life.

Thank you for being so fantastic. 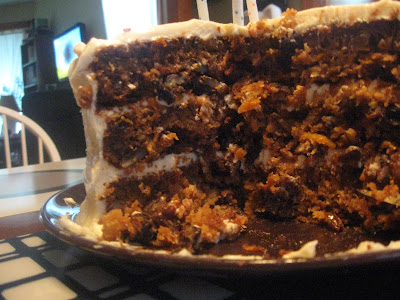 Mommy made carrot cake for your birthday this year. You didn't have any last night but after you woke up from your nap today you tried a piece (you insisted on it, actually, "It's my birthday! Give me cake!) you absolutely loved it. 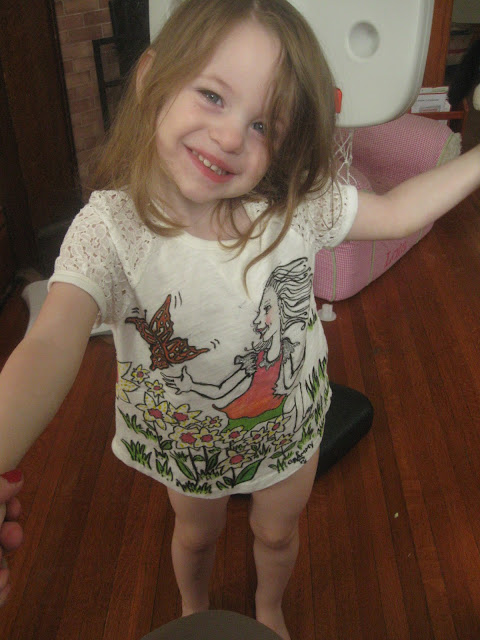 Grammy Pammy made you this shirt. She's awesome and loves you so very much.

Fun in the Sun 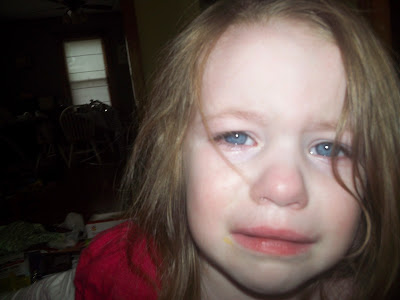 When Lois heard it had been so long since I've updated and this made her very sad.

I decided that since updating would make her happy again, we needed to go outside so that I could get some good photos to share of her with the family! 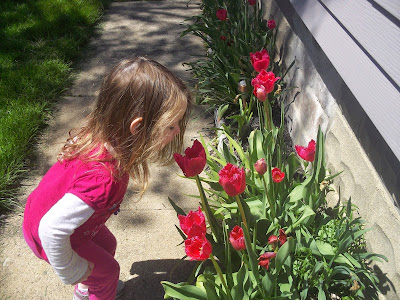 She took a moment or two to stop and smell the flowers before running.

I actually tried to pose her doing this with the flowers but she wouldn't stand still until it occurred to her later (and without prompting) that she actually wanted to smell the flowers.

I guess I'll stop trying to get her to do what I want and let her do her own thing; they often turn out to be the same thing, except for when they don't. 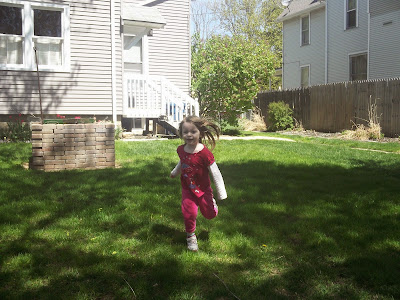 She (and I) really loves our new back yard. She runs, smells the flowers, helps me pull weeds (and sometimes things that aren't weeds), and rolls in the grass right after I've cut it.

She's slightly allergic to grass so that last bit isn't such a great thing. 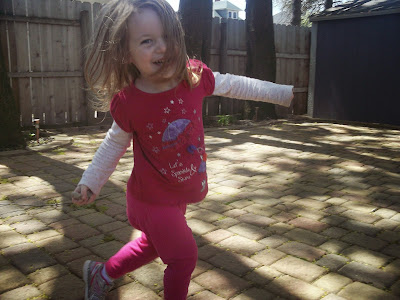 On the patio she decided that the best thing in the world was to run in a circle around me while I tried to take a picture. It was her favorite game in the world for almost 10 whole minutes! 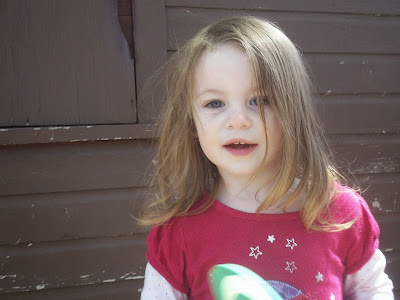 I just really like this picture. I have nothing clever to say here. 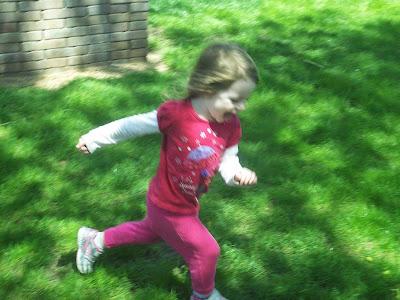 This is my favorite little girl in the whole wide world. I love her with all of my heart.
Posted by Snippet at 2:28 PM No comments: